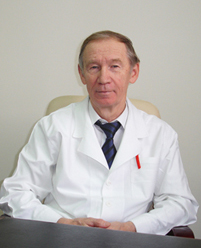 is Professor of Medicine, corresponding member of the Russian Academy of Medical Sciences and Head of the Atherosclerosis Department at the Institute of Clinical Cardiology named after A.L. Myasnikov of the Federal State Institution “Russian Cardiology Research and Production Complex” of the Russian Ministry of Health in Moscow.
After graduating as a medical doctor from the Russian National Research Medical University named after N.I. Pirogov in Moscow in 1970, he subsequently received specialty training in internal medicine. In 1975 he obtained his PhD (thesis on “Coronary disease burden and some features of hemodynamic and myocardial contractile parameters in patients with atrial fibrillation”) under the guidance of Prof. E.I. Chazov.
In 1985 he was awarded the Doctor of Science degree (thesis on “Percutaneous transluminal renal angioplasty in the treatment of renovascular hypertension”) and was appointed a Head of the Hemodialysis and Plasmapheresis Laboratory at the U.S.S.R. Cardiology Research Center.
In 1990-2006 he acted as a Deputy Director for Science at Russian Cardiology Research Center. Since 2006 he was a Head of the Atherosclerosis Department at the Russian Cardiology Research Center, a federal state institution of the Ministry of Health.
In 1991 he was awarded Professor of Clinical Cardiology and in 2002 ¬ Corresponding member of the Russian Academy of Medical Sciences.
In 2009, Dr. Kukharchuk has founded Russian National Atherosclerosis Society (RNAS), for which he served as a president for 3 years. Currently he is a board member of the RNAS and holds a position of the editor-in-chief of the “Atherosclerosis and Dyslipidaemias” Journal. He is a board member of the Russian Society of Cardiology and a member of the Scientific Council of the Russian Society of Cardiosomatic rehabilitation and secondary prevention. He also is a member if the European Atherosclerosis Society (EAS), European Society of Cardiology (ESC), International Atherosclerosis Society (IAS). In addition, in 2012 he was the member of the International Advisory Board of XVI International Symposium in Atherosclerosis in Sydney (Australia), and was appointed as an Executive Scientific Committee member of the Russian Society of Cardiology. He has organised or co-organised numerous Russian and International conferences, mainly on atherosclerosis and cardiovascular disease in general.
Prof. Kukharchuk is an active investigator in the field of atherosclerosis, inflammation and clinical trials with lipid lowering drugs. His research interests focus on preventive cardiology, clinical lipidology, cellular mechanisms and genetics of lipoprotein metabolism disorders, familial hypercholesterolemia.
He sits on the editorial board of several medical journals (Cardiovascular Therapy and Prevention, Rational Pharmacotherapy in Cardiology, Kardiologicheskiy vestnik).
Prof. Valery V. Kukharchuk has supervised 25 Ph.D. students and 10 post doctoral fellows, and has published more than 300 original and review articles, book chapters, guideline statements for clinical practice, and editorials. Over the past decades he has given numerous talks on how to diagnose and treat atherosclerosis and its complications, and on modern aspects of diagnosis and treatment of familial dyslipidaemias.